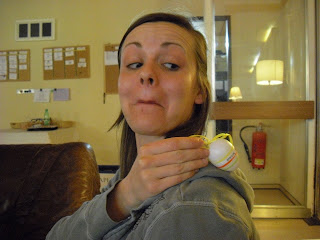 Allow me to explain this picture...

It's Easter time and for a lot of people that means Easter egg hunt!! Last weekend we hid 30 eggs in our dorm and set the girls loose to find them all! They got candy for each egg they found, and in order to raise the stakes, we hid a "special egg" that, if found, meant that the finder would be exempt from their daily chores for a day. Recognizing that these are not little toddlers with pink and blue bunny baskets but candy-starved teenagers, we knew we had to make this a challenge and so we were pretty sly in our hiding tactics. My second favorite hiding spot was the picture below where I put tape on the egg and stuck it in an empty light fixture! 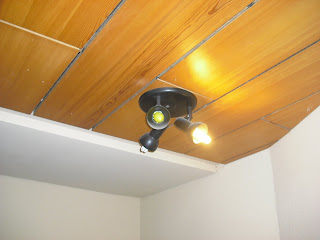 But, my most favorite hiding spot was where we hid the "special egg"...you guessed it! In the hood of my jacket! All the girls were in their rooms and when we were finished hiding the eggs we yelled: "ready, get set, GO!" And they burst forth and ran screaming down the hallways like a bunch of crazed pop-star fans! It was much more of a response than I expected!
Here's Joy and Kara... 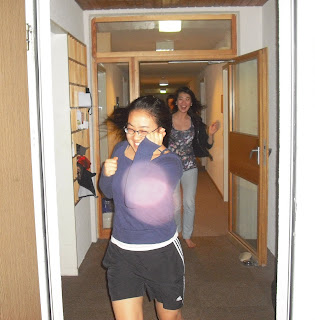 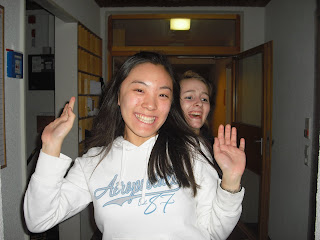 This was Eunji's very FIRST Easter egg hunt! She didn't even know what it was and so we had to explain the concept to her many times throughout the day. Her roommate, Krystal, is behind her; she was excited too! 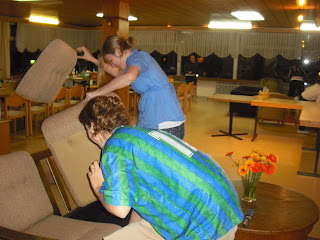 Me, Bonnie and Stephanie (fellow RA and dorm mom) quickly realized that our "sly hiding tactcis" were a little too sly... even after tearing apart all the furniture in a mad rush, it still took them almost 10 minutes to find the first egg! And I was conveniently strolling around, parading around as the vessel for the coveted "special egg." 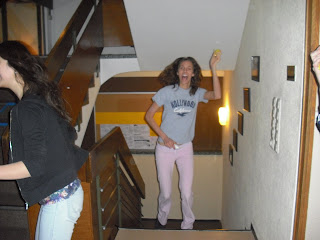 Lizzy was our most skilled egg-finder. She found about 6 of the 30 eggs, attributing her success to her height. 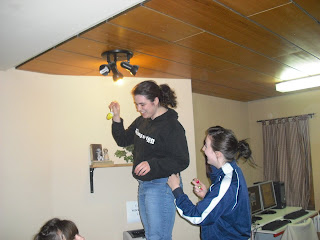 Hannah was the lucky one who found my 2nd favorite hidden egg. This happend about 20 minutes into the search when we were starting to give hints. After 30 minutes of searching, all the eggs had been found except...the special egg. At this point, the girls all started to congregate and were at the point of mutiny because they had searched everywhere (over and over) and still could not find it! A few minutes before this, I made the stupid mistake of telling our dorm dad, Luke, where the egg was hidden (he wasn't a part of the hiding). All of a sudden, things got quiet, and at the same moment I realized I was standing in the room all by myself, I heard something like this: "LIZZY!!!!! [scream scream scream] GET HER!!!!! [scream scream scream] LIZZY!!!! [more screaming, stampeding feet] HER HOOD!!! [more stampeding feet and then the thud of my body hitting the floor as I was mauled]."
As I fell to the floor, I caught a quick glimpse of Luke slinking away with a guilty grin on his face...I'll get him back.
Meet Jersey: 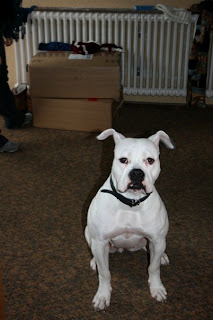 Jersey belongs to Luke and Stephanie and she is just over a year old. She has quickly become the dorm mascot and there's always a lot of laughter when she's around. But this laughter is usually because she has eaten something crazy (like a ceramic tile) or is chasing (and chewing) her tail again. I can honestly say that she can be accurately compared to the stories about Marley from the book/movie "Marley and Me."
So for the next week, I volunteered for the marvelous task of dog-sitting this precious puppy. Luke and Stephanie are away for a week leading a missions trip! Every Spring Break, the school sends out about 6 teams, comprised of students and the staff, to different parts of the globe, then there's a week left of break to rest and gear up for the last bit of the school year. If you think about it, please pray for the teams; right now they're in Greece, Macedonia, Tanzania, Burkina Faso, and a country central Asia.
My first few days of Break have consisted of taking Jersey for walks, cleaning up after her during our walks, "playing" chase with her around the yard because she won't come inside (while my German neighors stand and watch), and waking up every couple of hours in the night to the sound of a sick dog...if you know what I mean. Thankfully, she is over her sickness as of this morning and hopefully we can have a fresh start! haha
In addition to this, BFA is hosting an annual ACSI conference. ACSI stands for Association of Christian Schools International and the conference is ICEC: Internations Christian Educators Conference. We're BIG fans of acronyms. (BIG stands for.....hahahaha just kidding) Because my dorm is in town where the school is, our dorm is being used as a guest house and so we will have over 20 people staying with us for the next few days. They will all arrive by this evening and the conference officially starts tomorrow and ends Tuesday. It's not the most ideal thing to be "hosting" so many guests in my dorm on my break, but it has been great to meet like-minded people from all over the world.
Alright, time to take Jersey out for another walk--thanks for reading!
Posted by Lizzy Schulz at 8:24 AM

oh my goodness! the picture does say a lot - lol!

I love your summary of the Easter Egg hunt and of JERSEY! Oh the joys of life in Palm!