This past weekend was packed with activity!
On Saturday afternoon from about 1-5:30 we all primped and prepared ourselves for the evening's banquet. Yes, that's right--it took four and a half hours for all of us to get ready! We had 5 people doing hair, a couple of people painting nails...and I ironed dresses because I don't know how to either of the other two things. Then we all headed down to the school for the annual Christmas Banquet which consists of a sit-down dinner and a series of performances by the students. It was a great time! 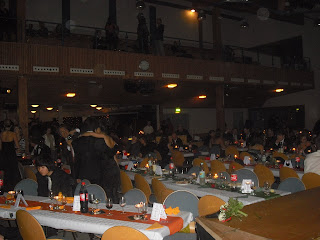 This is the auditorium at school decorated for the dinner. 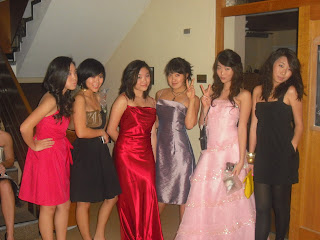 A few of the girls all ready for the banquet! (finally!) 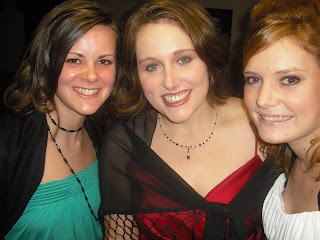 Me, Bonnie and Jessica .
Football????
Wittlingen is another girls dorm, and for some reason there is an ongoing rivalry between our two dorms. So naturally, we let out this pent-up aggression through a flag-football game! In order to help you understand the potential complexity of this, let me set up a scene for you:
It's three days before our game and I sit down with a group of the girls in my dorm to talk about the rules of the game because they're different than regular football. Before I have a chance to begin, one of them (who shall remain nameless) pipes up and says, "So, what is the end goal of this game anyways? Flag footbal? Do we throw around flags or something?!?"
Growing up in Europe (and other places) these kids don't really know much about American football at all! So, we started from scratch with some of them and were able to have a couple of practices before our big game on Sunday afternoon. Luckily, our dorm dad, Luke, loves football and was even able to teach them a few offensive plays. 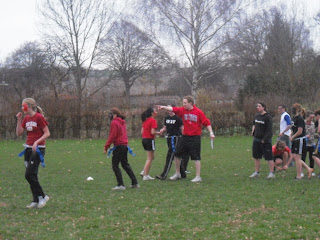 This is Luke coaching from the sidelines. 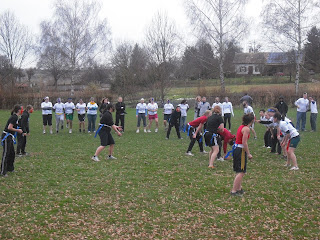 Our team has the blue flags on and Hannah is the quarterback, ready to launch a rocket! 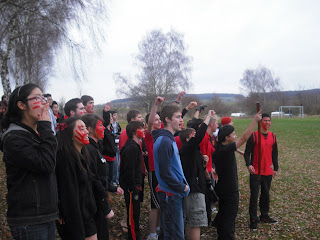 At the beginning of the semester Maugenhard (the guys dorm upstairs) played in a rugby game against the other guys dorms, and we all dressed up in red and black and cheered for them. So our game was their chance to return the favor and cheer for us! They all dressed up and put face paint on (to match all of us) and yelled their little hearts out! 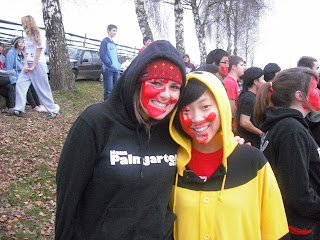 This is me and Dahee. Yes, we have red hand prints on our faces and yes, she is wearing a bumble bee suite. Dorm spirit! 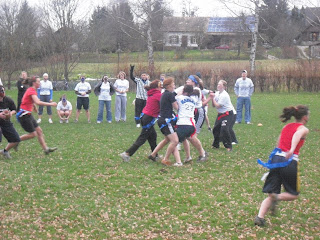 Here's a shot of a play in action--Hannah (far left) is looking for someone to pass to while Kjersti (far right) runs to get open.
The game was pretty evenly matched and turned into a defensive battle. We scored during the first half and they came close a couple of times. But in the end... 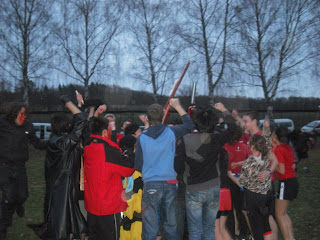 WE WON!!!! The Maugenhard guys rushed the field and celebrated our victory with the girls. It was great!
I am glad that we had such a busy and eventful weekend because it's getting close to the end of the semester and everyone is weary and ready to go home for Christmas. Just three weeks left! This coming weekend will be busy again because it's our first home basketball game! It will be especially fun for me because this year I am the JV girls assistant coach! I'll be sure to take pictures and let you know how our first game goes!
Posted by Lizzy Schulz at 9:05 AM