There's one tiny thing I forgot to mention in my last blog: 2 weeks ago the girls in my dorm snuck out in the middle of the night and slept over at a guys dorm!!!!
My dorm is about 4 kilometers (just over 2 miles) away from HBR, the guys dorm that Brandon works at. It is an ongoing tradition for the students to conspire amongst themselves and plan a secret "dorm swap" where they sneak out in the middle of the night, walk along the road all the way to the other dorm and sleep there the rest of the night, waiting to surprise the dorm staff in the morning! The students kept it a complete secret from all of us, but they got permission from our boss, the Residence Life Supervisor.
I was assigned to breakfast the morning of the swap and what a surprise I had when I walked out into the common area and saw a bunch of bodies covered in blankets scattered all around!!! I stood for about 10 seconds with my jaw on the floor, then I finally realized what it was! I laughed out loud, which woke up a few of the guys, then my next thought was: "Oh no! How am I going to feed all of these guys!!"
But everything worked out just fine. I didn't get any pictures because I was rushing around trying to scrounge up enough food for 26 hungry guys, but below are some pictures that Greg, the dorm dad at HBR, took of the girls at his dorm.
Some girls sleeping in the guys computer room. 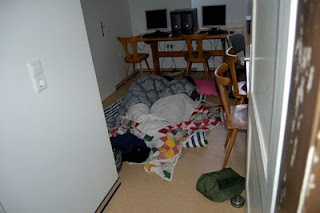 Girls sleeping on the couches and floors. 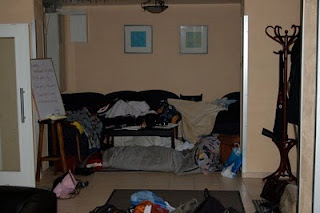 Greg was nicer than me and quickly fixed a nice French toast breakfast! 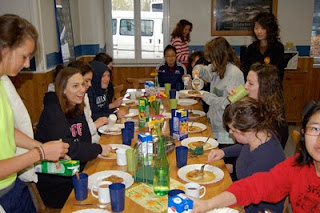 Soccer & Track Weekend
This past weekend the Soccer and Track teams played at "home" and so we all gathered at the nearby soccer field and track complex to support our teams. We have guys varsity and junior varsity (JV) team as well as girls varsity and JV, so it makes for a long day to watch 4 games and a track meet! There are 8 girls in my dorm who play soccer, and 3 who are involved with track--it was so much fun to watch!
Kjersti is the girl in blue in the middle--she is a great runner! 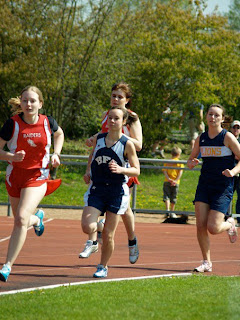 This is Jessica and although this is the first year she has been on the track team, you would never know it! She is a great athlete and finished first in all her races! 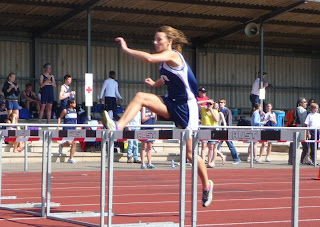 Katey is one of the goalies for the girls varsity and JV teams. It's actually her first year to play soccer, but she's done very well so far! 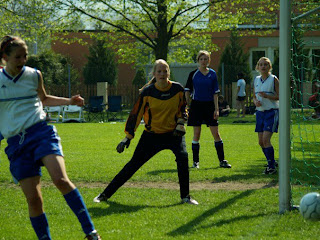 Krystal is the girl on the right in the white. She plays on JV and although she is little, don't let that fool you! She's tough! 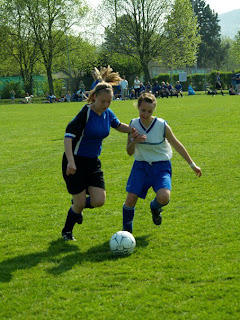 And this is the other Jessica, scoring her first of three goals for this game!! She is an amazing soccer player and has been awarded a scholarship to a university in the States!

Our teams did well and all but the JV girls team won their games (the JV girls tied)! They have an "away" game this weekend and so the dorm will be much quieter with 11 of the 19 girls gone! I will miss them, but I'm not complaining about a little extra peace and quiet! :)
Posted by Lizzy Schulz at 12:39 PM